BRINGING THE CONSULATE CLOSER TO THE COMMUNITY – Ms Neeta Bhushan 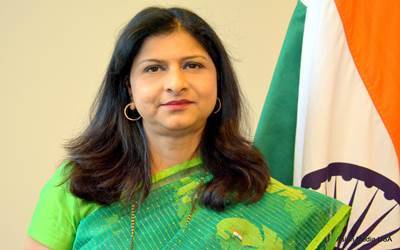 “I am privileged to be in Chicago” – Ms Neeta Bhushan, Consul General of India, Chicago

“We are adding new features such as “Ask the Consul General” where I would be personally answering any queries and responding to concerns of the community members.” Ms Neeta Bhushan

In January this year, Ms Neeta Bhushan assumed the charge as the new Consul General of India in Chicago. Ms Bhushan has had an illustrious career and has held several important positions including Head of Economic and Commercial Wing in the India Embassy in Berlin, Germany and Director in the Department of Economic Affairs, Ministry of Finance amongst many other impressive assignments.
Ms Bhushan has already being building a direct connect with the Indian community in Chicago and has been planning more outreach programs such as – Consulate at your doorstep to be involved in community affairs and to deal with issues that the community has been facing.
As a woman achiever, she sums up the spirit of determination and grit that is integral to the hard working diaspora in Chicago. In a detailed interview with Hi India Ms Neeta Bhushan talks about bringing the community and the Consulate closer.

HI: You have just made the move from very warm Abu Dhabi to very cold Chicago, how have you been adjusting to the place and how is it been for the family so far in Chicago

CG: Yes. This is true. I came during winter in Chicago. However, the weather may be cold but people in Chicago are warm and welcoming and hence my family and me have been able to make the transition quite smoothly.

HI: We have been following your impressive tenure in UAE and would appreciate if you could list some of your achievements during your last tenure and how it added to the India-UAE relations. We believe you were instrumental in arranging PM Modi’s visit to Abu Dhabi, tell us about that.

CG: The last three years were momentous for India-UAE relations. Hon’ble PM’s visit to UAE in August 2015 was the first by an Indian Prime Minister in 34 years. Our relationship was strengthened considerably across many fields especially trade and investment, energy, space, defense and counter-terrorism, to name a few. Our relations were upgraded to that of a “comprehensive strategic partnership”. The Crown Prince of Abu Dhabi His Highness Sheikh Mohammed Bin Zayed Al Nahyan visited India twice in the span of one year. I was extremely privileged and honored to have the opportunity to both participate in and witness such historic and significant events.
My tenure in Abu Dhabi was extremely interesting and challenging at the same time. Over 2.6 million Indians live and work in UAE. Our effort was to provide services speedily and efficiently. In addition, the Embassy continuously worked with the business chambers to promote two-way trade and investment.

HI: How have been your initial experiences in Chicago with the Indian community? Any particular issues that have caught your eye and you intend to focus on it.

CG: I have had an excellent experience so far. I have had the opportunity to interact with various dignitaries. I have called on the Governors of Indiana, Michigan and Wisconsin. In addition, I have met many Mayors, Congressmen and other elected officials. Ambassador HE Navtej Sarna visited Chicago in April and had a wide range of meetings. I have also interacted with various community bodies and members. My efforts would be to continue to work for promoting business ties between India and the US Midwest and to provide efficient services to the diaspora as well as to the American community.

HI: Do you have any particular press policies both for local Indian media as well as American media here. Is there any initiative where any issues pertaining to community such as crime or international affairs that will be shared from the CG office for the community.

CG: Yes. I am looking at an extremely active engagement with the local press. We are planning to have regular press interactions. During my last 4 months, at least three press interactions have taken place. Also press is being regularly invited for all our events.

HI: In the recent past there was a racket that was busted where some Indians were running a fake call center calling innocent Indians in America and extorting money on the pretext that they were calling from the tax department. While it was covered widely in desi as well as American media do you think initiatives such as notices from the CG office or awareness camps on such issues can create better understanding amongst Indians who get duped by such scams.

CG: Yes, I have read about the scam in the newspapers. We hope to play an active role in bringing awareness to the community members. Also I hope that the members will be more engaged with the Consulate and call or email whenever they have a doubt or there is any confusion. My officers and staff members are very prompt in answering queries. Most queries are answered within 24 hours. I have also put in place a receptionist who is answering calls from 9.00 am-5.30pm.

HI: There has been an initiative to hold an open house every fortnight beginning this January and your decision to be present at the open house is commendable. There have been earlier complaints pertaining to Indian visa, OCI, Passports etc. How has been the response to this initiative?
CG: The response has been tremendous so far. A number of people have been coming to the Consulate to discuss their issues. They also give us suggestions as to how we can do even better. I have met a number of people including students who have come up with interesting ideas. In fact as a result of the Open House, the number of complaints have gone down considerably!

HI: What are the new steps you would be taking for the Indian community in Chicago.
CG: My effort has been to make the Consulate as approachable and friendly as possible. In addition to a dedicated receptionist for answering calls and Open house, we are planning more outreach programmes such as – “Consulate at your doorstep”. We hope to do this through a number of Consular Camps in all the nine states that come under the Consulate’s jurisdiction. So far we have already had an excellent response to several camps that we have held in St. Louis, Missouri, Detroit etc. More camps are planned over the next 3-4 months. Such camps are also being planned at business houses. We are adding some new features such as “Ask the Consul General” in which case I would be personally answering any queries and responding to any concerns of the community members.
HI: There have been some complaints about the Indian policy of issuing visa through an outsourced company (Cox and Kings) Unlike other countries that allow you to apply online or through an agent, there have been issues pertaining to speedy services. The community has complaints that now the process has become lengthier as they have to go the downtown to drop and pick passports. Any reason why the local agent facility was scrapped? What would you say to the people especially those in suburbs and neighboring states discomforted by this new rule?

CG: The Government of India has entered into an agreement with M/S Cox & Kings Global Services Private Limited for outsourcing of services related to visa, passports and OCI etc. at Embassy of India, Washington D.C. and five of its Consulates in USA i.e. at Atlanta, Chicago, Houston, New York and San Francisco. The Consulate does not recommend or work through any agent/ agents. The applicants are advised to submit their applications in the office of the service provider located in downtown. Those applicants who are living in suburbs or in the neighboring states may send their applications by courier or postal mail.  A number of applications are received by courier/postal mail. Hence there is no need to come personally. Also, the Government of India has instituted the e-visa facility which makes obtaining a visa even simpler. The entire process is done online. Details are available at www.indiaonlinevisa.org

HI: Any new initiatives, news achievements or thoughts about the community in Chicago that you may want to share with us.

CG: I feel extremely honored and privileged to be in Chicago where the community is so dynamic and vibrant. It is a very interesting assignment and at the same time is a huge learning experience for me. I am grateful for the support of the community members for all our endeavors. Whenever I have reached out to somebody for any suggestion or support for our activities, the response has been tremendous. I am impressed by the way in which diaspora feels connected to India and wants to give back to India. I would like to say that please treat the Consulate as your own and feel free to reach out anytime.

The Indian Consulate in Chicago will be actively promoting a lot of cultural activities such as Yoga Day, Gandhi Jayanti and Guru Gobind Singh ji birth anniversary. Ms Bhushan talks about many other cultural initiatives:
This year we would also be celebrating [email protected] in a big way. The Consulate is collaborating with Art Institute of Chicago, Eye on India, Indo- American Heritage Museum, and Hindi Lovers Club etc. for a number of activities. In addition, we have planned Kala Utsav, which will showcase various dance forms of India.
Some of the activities are as follows:
June 24th- 3rd International Day of Yoga – Naperville Yard, Naperville
July to August- Exhibition of Paintings of late Shri. MF Hussain at Art Institute of Chicago
July 23rd- celebration of the 350th Birth Anniversary of Guru Gobind Singh – Gurudwara, Palatine
July 29th2017 to January 7th 2018- Beyond Bollywood: Indian Americans Shape the Nation at the Field Museum, Chicago
August 15th – Independence Day Flag Hoisting Ceremony at the Daley Center, Chicago
August 26th- Kala Utsav at Yellow Box, Naperville
September 7th to September 23rd- India @70 initiative program by Eye on India at various locations in Chicago area
September 9th- Hindi Divas 2017 at Yellow Box, Naperville
October 2nd- Gandhi Jayanti celebrations
October 31st – 142nd Birth Anniversary of Sardar Vallabhbhai Patel
November 24th – Constitution Day at the Consulate
The Consulate will also be supporting the Heartland film festival at Indiana.
(August 18th-20th) where several Indian films will be showcased and many Indian filmmakers are expected to be present.
I would like to invite all your readers to join us at these events and make them a huge success.

Odd-even scheme to be back in Delhi: Kejriwal