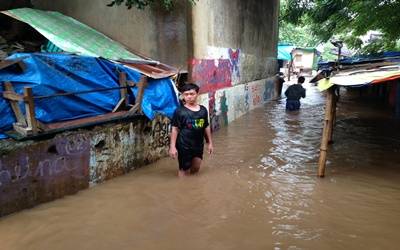 Colombo, May 27 (IANS) Sri Lanka’s Ministry of Foreign Affairs made a global appeal as the death toll from flash floods and landslides rose to 91.

"The Ministry of Foreign Affairs has activated the Emergency Response Unit of the Ministry, to coordinate rescue and relief measures related to the flood situation in several parts of Sri Lanka," Xinhua news cited a statement from the ministry as saying on Friday.

"In this regard, the Ministry of Foreign Affairs in coordination with the Ministry of Disaster Management, has made an appeal to UN, International Search and Rescue Advisory Group (INSARAG) and neighbouring countries to provide assistance to affected people, especially in the areas of search and rescue operations."

The Disaster Management Center said that the death toll from flash floods and landslides had risen to 91 by Friday evening while 110 people were reported missing and over 52,000 displaced after hours of severe rain and strong winds.

Evacuations have also begun in the outskirts of the capital as a flood warning has been issued due to the rising waters in three major rivers.

Hours of rains and winds had inundates towns, railways and highways hampering transport services while the Education Ministry ordered schools to be shut due to the inclement weather.

As search for those missing continued by the tri forces, police said the death toll could rise.

The Meteorology Department has warned of more rains in the next 24 hours.

Barcelona goalie Cillessen back in training after injury