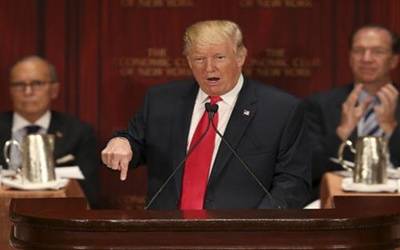 Washington, Jan 28 (IANS) US President Donald Trump has signed two executive actions including one limiting the flow of refugees into the US by instituting what the President has called "extreme vetting" of immigrants.

"I am establishing new vetting measures to keep radical Islamic terrorists out of the United States of America," Trump said on Friday during the signing at the Pentagon after the swearing-in of Defense Secretary James Mattis, CNN reported.

"We don’t want them here," the president said.

Titled "Protection Of The Nation From Foreign Terrorist Entry Into The United States," the executive order would start to make good on Trump’s promise to tighten borders and halt certain refugees from entering the US.

At the Pentagon, Trump met privately for about an hour with Mattis, Vice President Mike Pence, Security Adviser Mike Flynn and military officials and they discussed accelerating the defeat of IS, confronting global threats like North Korea, military readiness and the National Guard, a Defense official told CNN.

The meeting took place in "the tank," secure room where the Joint Chiefs meet.

Trump also signed a second executive action on Friday that would spur military spending and, as Trump said, "begin the great rebuilding of the Armed Services of the US."

The President added that the executive action instructs Mattis to begin "developing a plan for new planes, new ships, new resources and new tools for our men and women in uniform."

According to drafts of the order obtained by CNN, the order bars all persons from Iraq, Syria, Iran, Sudan, Libya, Somalia or Yemen from entering the US for 30 days and suspends the US Refugee Admissions Program for 120 days until it is reinstated "only for nationals of countries for whom" members of Trump’s Cabinet deem can be properly vetted.

The total number of refugees admitted into the US would also be capped during the 2017 fiscal year at 50,000, down more than half from the current level of 110,000.

Democrats blasted Trump’s move — despite not having the text of the documents — arguing that while it may not ban all Muslims from entering the US, it still is discriminatory.

"Make no mistake — this is a Muslim ban," Sen. Kamala Harris, a Democrat from California, said in a statement.

"Tears are running down the cheeks of the Statue of Liberty tonight as a grand tradition of America, welcoming immigrants, that has existed since America was founded has been stomped upon," Senate Minority Leader Chuck Schumer said in a statement.

"Taking in immigrants and refugees is not only humanitarian but has also boosted our economy and created jobs decade after decade. This is one of the most backward and nasty executive orders that the president has issued."

The White House has not yet released the official text of the executive actions.

US dollar rises after GDP report

Thanks, comrades! US SOUTHCOM amuses Twitter followers with pic celebrating US Air…

‘Are you undercover?’ WATCH riot cops at Justice for J6 rally detain masked man with…

‘Freedom Fries’ back on the menu? US-France row over submarine deal with Australia…

Vadivelu and I plan to work together again:…