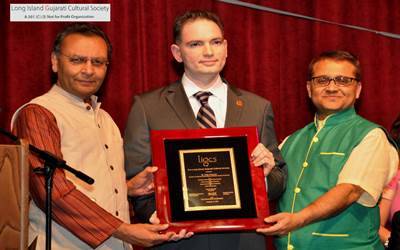 CHICAGO, IL — November 12 has become a historical day for the Indian-American community as one of their own was honored on two big platforms. It’s a day of double honor for Dilip Chauhan, an Indian-American, based in Long Island, New York, and a day of pride for the entire South Asian community.

On November 12, a Sunday, the US Congress dedicated the day as the ‘Dilip Chauhan Day’ from the 6th Congressional District in New York. The decision was announced by Congresswoman Grace Meng from Sixth District. Meng is the first Asian woman to become a congresswoman in New York.

On the same day, the Long Island Gujarati Cultural Society (LIGCS) invited and honored Dilip Chauhan as a ‘Guest of Honor’ at their Annual Gala to celebrate Diwali at Gujarati Samaj in New York. Chauhan graced the occasion with his presence and was honored by the society. The event was attended by about six hundred people from LIGCS.

Chauhan is a well-respected advocate and leader within the South Asian Community in New York City and Long Island. He is a first South Asian American to be recognized as Political Rising Star “40 under 40”

‘Sardar the Game Changer,’ is an eye-opener for many Indians

Free Trade Agreement is the Next Frontier in India-US Ties: USIBC President