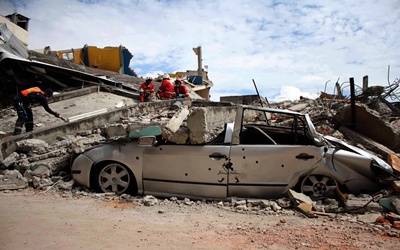 United Nations, April 20 (IANS) At least 150,000 children have been affected by April 16 earthquake in Ecuador, the strongest tremour to strike the Andean country in decades, according to initial estimates by the UN Children’s Fund (UNICEF).

"We are in a race against time to protect children from disease and other risks common in such emergencies," said Grant Leaity, the UNICEF representative in Ecuador, on Tuesday, Xinhua reported.

An earthquake of 7.8 magnitude on the Richter scale struck Ecuador April 16 night, killing at least 413 people and injuring more than 2,500 others, reports said.

According to the preliminary government reports, the earthquake damaged 119 schools, affecting 88,000 children. Some 805 buildings have been destroyed and 608 have been damaged. Two hospitals have entirely collapsed in Portoviejo and Chone.

In some of the worst-hit areas, mudslides are causing further damage to infrastructure and hindering access of relief teams and supplies. Some cities are still without full power and only 40 percent of communication lines are working.

UNICEF is concerned about health, water and sanitation conditions in the coastal areas, which are already considered hotspots for Zika, Dengue, Malaria and Chikungunya.

UNICEF teams are in Pedernales and Esmeraldas — two of the hardest-hit areas — assessing children’s needs and coordinating the response.

Ecuador, which has declared a state of emergency in six provinces, has mobilised around 14,000 army and public security personnel in affected areas.

Covid-19 pandemic will be over in a year, Moderna chief executive says

Myanmar to get special attention from Modi government

New Islamabad airport to be fully ready by 2017