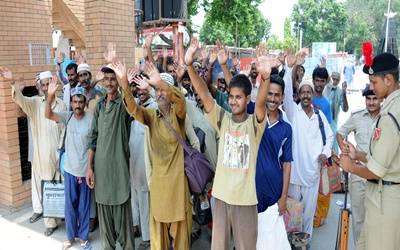 Islamabad, June 22 (IANS) India and Pakistan are using arrested fishermen “as bargaining chips”, a leading Pakistani daily said, adding that the fishermen want to make a decent living and are not a threat.

An editorial “Fishermen’s release” in the Dawn on Monday said that Indian Prime Minister Narendra Modi’s recent phone call to his Pakistani counterpart Nawaz Sharif to convey Ramadan greetings “may not have solved the Sir Creek dispute, but it was no less momentous for around 200 Pakistani and Indian fishermen imprisoned in each other’s countries”.

Modi’s promise to ensure that Pakistani fishermen detained in his country would return home for Ramadan was promptly reciprocated by Nawaz Sharif with the release of 113 Indian fishermen behind bars here since around nine months.

This was immediately followed by India releasing 88 Pakistani fishermen held in its prisons, the daily said.

The editorial said that these impoverished people “feature in a pantomime that regularly takes place every few months or so between the two neighbouring countries – the release from prison of a clutch of hapless fishermen belonging to one side or the other”.

“The fishermen, only looking to make a decent living, are no threat, nor does anyone seriously consider them to be so. Yet they are used as bargaining chips, to be played when the time is right.”

“Surely it did not need the sighting of the Ramadan crescent, or a phone conversation between the premiers of Pakistan and India, to bring the misery of over 200 families to an end,” it added.

The daily said that most fishermen are not treated badly during their incarceration, but that is “small comfort for those who get caught in the infernal game called politics, much like the struggling fish they catch in their nets”.

Yoga Day: When world came together at India’s call

The Mooncloud Events: The pulse of events and wedding…