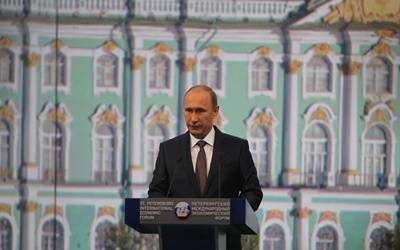 St Petersburg, June 20 (IANS) Does the man who started the latest yoga fad across the country, and was instrumental in getting June 21 recognised as International Yoga Day, himself practice it?

That’s what Russian President Vladimir Putin wanted to know from this IANS correspondent when he met him along with wire service reporters from 11 other countries.

“Does Modi do yoga?” Putin asked, when an aide told him that Indian Prime Minister Narendra Modi had started a Ministry of Yoga.

He was incredulous that such a ministry could be set up, and then smilingly asked why anyone would do that. He was curious to know if the man who wants to spread yoga, practice it. He was told that it was likely, though he had not been publicly seen to do it. “Really?” he asked, with a smile.

“He is a good man, and a personal friend,” Putin said in reply to a question from journalists who met him at midnight at the end of the second day of the St Petersburg International Economic Forum here. The meeting was originally fixed for 8 p.m. but Putin said he could extricate himself with difficulty from others seeking his attention, one after the other.

He said he often found it difficult to interrupt when people go into lengthy explanations about their issues.

In response to a question by IANS, that he and Modi were both being seen as “tough leaders”, Putin said it was not true.

“I am not tough. I am always willing to compromise,” adding that often the other side took a tough stand. “They say they have two opinions. One, that they are right. And the second, that I am wrong,” Putin said at his official residence in the city.

When the question-answer session was coming to an end around 2 a.m., Putin was asked by this correspondent if he would be ready to answer a few more questions, “since the president was not available for such meetings every day”.

He raised his eyebrows and said : “Are you out of your mind?”

He waited for a while for the translator to deliver it in English, before breaking out in a broad smile.

“Ask as many questions as you want, I will answer all of them,” Putin said. However, in the end, he took just two more questions and said, “That’s it.”

As he came around the round table to shake hands individually, he was asked if he was up till after 2 a.m. every day, and he said: “Yes, this happens all the time.”

Curiously, the exact number of seats at the roundtable on the third floor where Putin met the journalists was 13 apart from Putin’s chair. So was the number of seats in the waiting room for presidential meetings on the first floor – 13. Coincidence? Perhaps, that’s why the number of journalists chosen was 12 with the Tass Chief Editor moderating the meeting.

Putin, who is from St Petersburg, stays at the official residence, when in town, which incorporates the Boris Yeltsin digital library. It’s a large building, as large Russian buildings tend to be, with huge server banks storing some 40 million pages of Russian history and modern day information in about 250 terrabytes of storage space, half of which are accessible online in English and Russian.

Each of the 12 journalists was given a honorary membership card to the library “which is valid for 100 years”. The building was built in 1835 as a Holy Synod and turned into a digital library in 2009.

Only One Glass Drink To Cure Diabetes | Diabetic Home…

Salman’s ‘Tubelight’ teaser to be out next…