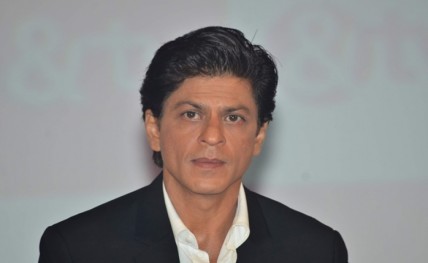 Mumbai, May 17: Though defending champions Kolkata Knight Riders (KKR) lost their match against Rajasthan Royals, Bollywood superstar and KKR co-owner Shah Rukh Khan had some moments of joy in the stands where he was joined by his youngest son AbRam and actors Varun Dhawan, Kriti Sanon and Varun Sharma.

The 49-year-old took to Twitter to thank them for supporting his team.

In another post, he added: "& thank you Varun Dhawan…Kriti and Varun for turning up and supporting the team. Lov u & sorry couldn’t give you more reason to cheer.

“On behalf of KKR i promise to Kolkata, v will try harder to make you proud. Monsoon or Math is not the Mard thing to do…next yr. Insha Allah.”

The “Chennai Express” star also posted a black and white photograph of him and AbRam, where the two are seen staring at each other. In the caption, Shah Rukh wrote a conversation between the two.

However, this was not AbRam’s first appearance on a cricket field as he was also present at the KKR’s opening match of eight edition of Indian Premier League last month. (Bollywood Country Report)

When Salma Hayek Revealed Donald Trump Hitting Her, Asking Out & Telling Her…

Pranati Rai Prakash Opens Up About Character Sumii In Cartel, Adds It Was A Great…

Yung Raja On Paying Ode to Rajinikanth: “I Wanted To Celebrate His Supremacy In My…

Mimi: From Kriti Sanon, Pankaj Tripathi To Sai Tamhankar – Vote For The ‘Best’ From…

Drashti Dhami On Her Look In The Empire: “It Reflects Royalty But Also Allows Me To…

Shilpa Shetty Defamation Case Gets A Reply From Bombay HC, Court Says “Reporting Of Something That Police Source Said Is…