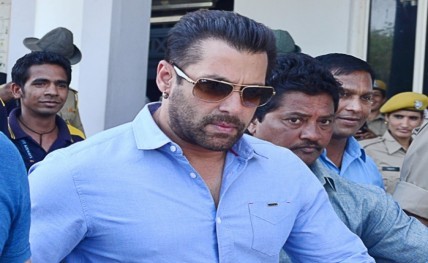 Jaipur, April 29: Bollywood actor Salman Khan on Wednesday reached the court of chief judicial magistrate (CJM) in Jodhur to record his statement in a case under the Arms Act.

CJM Anupama Bijlani had on April 23 asked Salman’s counsel to ensure his presence in the court on April 29.

"He (Salman) along with his body guard Shera and sister Alvira reached the court at around 9.50 a.m. A contingent of police was posted outside the court to control the fans who had come here in large numbers to get a glimpse of the film star," a police official told Bollywood Country.

Salman Khan and a few other Bollywood stars were accused of poaching blackbucks on the midnight of Oct 1-2, 1998 during the shooting of a movie "Hum Saath Saath Hain".

Two blackbucks, a protected animal under the Wildlife Protection Act, were killed on the outskirts of Kankani village near Jodhpur.

Khan is accused of carrying and using illegal arms. He is also alleged to have been carrying arms with an expired license.

The chief judicial magistrate had asked Khan to appear before the court for recording of his statement on April 23, but he did not come due to infection in his ear.  (Bollywood Country Report)