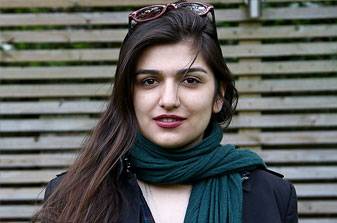 Tehran, Nov 24 (IANS) The British-Iranian woman, who was jailed after attempting to watch a men’s volleyball match in Tehran has been released on bail, media reported Sunday.

The family of the 25 year-old Ghoncheh Ghavami said that she has been freed on bail until her court appeal, after she staged hunger strikes and hundreds of thousands of people signed a petition calling for her release, The Independent reported.

Ghavami’s parents will now be reunited with their daughter, having previously described how they were refused a meeting when she was transferred to a new prison.

Ghavami was arrested and sentenced to a year in jail for “propagating against the ruling system” after she and a group of other women tried to attend the men’s volleyball match June 20.

Amnesty International said Ghavami had been kept in solitary confinement for most of her imprisonment and faced threats to her life during her trial.

This case had attracted public and international attention as a number of online campaigns were launched to demand Ghavami’s release.

The International Volleyball Federation (FIVB) had urged the Iranian authorities to release Ghavami.

It had banned Iran from hosting the 2015 World Junior Championship and had also warned Iran that it would not be allowed to host any other international competition if it did not remove the ban.

In the end, the Iranian authorities, under pressure, allowed women journalists to cover men’s volleyball matches, earlier in November.

Iran banned women from volleyball matches in 2012, arguing that women need protection from the lewd behaviour of male spectators.

Andy Slaughter, the MP for Hammersmith and Shepherds Bush, who has been working with Ghavami’s family for several months on this issue, termed her release as “excellent news”.

“(It is) a tribute to the campaign (that) her family in Britain and Iran have run, over the past five months. Support for her has come from around the world: Ghoncheh is a young woman of great courage,” he said.

Bengal governor to oversee Bihar too

Virginia fears Afghanistan evacuees may have exposed locals to MEASLES, but says high…

Concert on virtual icebergs to save Antarctica