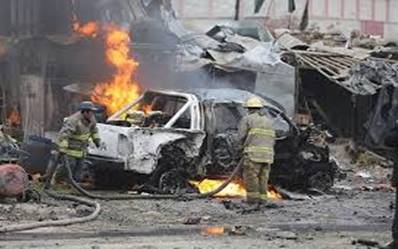 One killed in Afghanistan roadside blast Kabul, Nov 18 (IANS) One person was killed and 13 others sustained injuries when a roadside bomb struck a mini-bus in Afghanistan’s eastern Khost province on Tuesday, a spokesman of the provincial government said.

"A mini-bus with 14 people on board was driving from Zazai Maidan district towards provincial capital Khost city when it ran over a mine planted by insurgents, leaving one commuter dead on the spot and injuring 13 others, some in critical condition," Mubariz Zadran told Xinhua.

The deadly attack happened at around 8 a.m. and the injured, including women and children, have been taken to hospital for medical treatment, he added.

Taliban militants who are largely relying on suicide and roadside bombings were yet to claim responsibility for the attack.

This is the second deadly blast in Afghanistan since early on Tuesday.

The previous explosion, which hit the capital city of Kabul, left five people dead and three others injured.

66 arrested for election offenses in Brazil