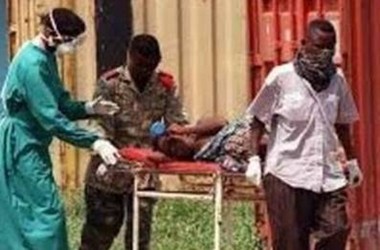 Madrid, Oct 16 (IANS) Teresa Romero, the Spanish nurse who is the first person to catch Ebola outside of Africa, continued to make slow recovery Wednesday.

The 44-year-old is now past the 15-day threshold and her body is now getting able to produce antibodies to combat the illness and the quantity of virus in her bloodstream has reduced in the first days of this week, Xinhua reported.

On Tuesday night, she was able to drink liquid for the first time since being admitted to the Carlos III Hospital Oct 6. She was able to hold a 10-minute phone conversation with her husband Javier Limon Wednesday.

Limon is currently under observation at the Carlos III due to his possible exposure to the virus.

Earlier in the day, Spanish Prime Minister Mariano Rajoy said the Ebola crisis in the country was "under control".

"We have to keep on working to keep it that way and supporting the professionals, but it is under control," Rajoy added.

Meanwhile, Health Secretary Ana Mato told Congress Wednesday that Romero had received training before attending to the missionary Manuel Garcia Viejo, who was brought to Spain after contracting Ebola in September. Romero was infected with Ebola while caring for a infected patient.

"At this moment, all of the lines of investigation are open over all of the possibilities which could have happened," Mato said.

Taboo around menstruation needs to be broken: Mary Kom

Taliban going back on its word, US & allies say

Italian dentist presents fake arm for vaccine to get pass

Elevated heart rate may up dementia risk among older

From Katrina To Deepika: Bollywood Actresses Who Earn More Than Their Actor Partners

Why Ranbir finds it ‘challenging’ to work with…