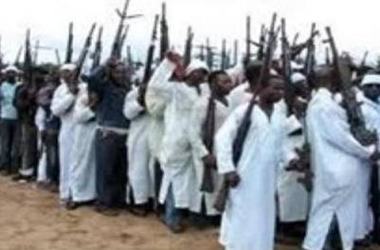 Abuja, Sep 1 (IANS) Heavy gunfire was heard Monday from the scene of a gunfight between Nigerian security forces and suspected members of the Boko Haram in the restive northeastern state of Borno, residents said.

Heavy gun shots were heard at Goneri, a community in Bama, the second largest city in Borno State, residents told a Xinhua reporter via phone call.

Ibrahim Mohammed, a leader of a youth volunteer force, said the attack by the militants was repelled by the security forces who promptly responded to a distress call by residents.

According to him, the gunfight might record heavy casualties as the battle continued with sporadic shootings.

Mohammed said the youths of Goneri, 80 km away from the state capital Maiduguri, had joined forces with the Nigerian troops to successfully repel the attack.

Many residents of the community, situated in the central part of Borno State, had fled in fear, he added.

The Boko Haram sect, which seeks to implement Islamic Sharia law in Nigeria, has become a major security threat to the West African nation.

John Hinckley, who shot Reagan, to be freed from oversight

Minus 2 years of life: Study compares mortality impact of Covid pandemic to WWII…

Some countries are hyping ‘China threat’: Beijing on Quad summit