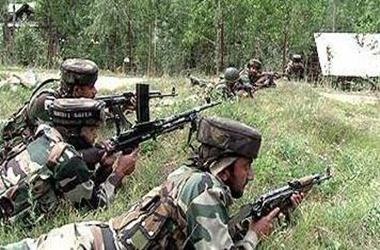 A Rangers spokesman said a mosque was badly damaged in the firing.

"Deputy high commissioner of India was summoned to the ministry of foreign affairs today (Monday) to lodge Pakistan’s protest over unprovoked Indian firing across the working boundary in Sialkot sector Aug 10-11 which resulted in one civilian casualty and injuries to three others," a Pakistan foreign ministry statement said.

The ministry claimed that it was the 54th incident of ceasefire violation by Indian troops since July this year.

The Indian envoy noted that such unfortunate incidents were taking place at a time when the leadership on both sides has expressed willingness to improve bilateral relations.

The foreign secretaries of India and Pakistan are scheduled to meet in Islamabad Aug 25, in a major forward movement in reviving stalled peace talks.

In India, four people, including two troopers, were injured Monday in Pakistan firing at the international border in Jammu and Kashmir (J&K).

According to an Indian official, Pakistan Army Sunday opened fire without provocation at Indian positions along the Line of Control (LoC) in J&K.

On Friday, Pakistan Rangers returned to India the captured Indian border guard, who had been swept away to Pakistani side by strong currents of Chenab River near border.

An increasing number of ceasefire violations have been witnessed across the international border between the two countries over the last month with both sides accusing each other.

A jab in each arm: France vaccinates against flu and Covid-19

China won’t compromise on core interests, says Beijing after Biden claims US is…

Increased risk of heart inflammation from Moderna Covid jab in young men, US…

Brook tells McIntosh to move on