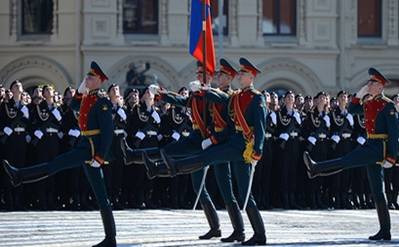 Moscow, May 9 (IANS/ITAR -TASS) Russia held a military parade on Friday in Moscow marking the 69th anniversary of its victory against the German forces in World War II.

The parade consisted of a march-past, a motorised display and the aerial exhibition.

The motorised display included 151 vehicles and units of technology and an aerial display was performed by 68 aircraft and helicopters.

President Vladimir Putin, who is also the commander-in-chief of the Russian Armed Forces, attended the parade.

"It is a holiday when an overwhelming force of patriotism triumphs, when all of us feel particularly acutely what it means to be loyal to the Motherland and how important it is to defend its interests," Putin said.

Other than Moscow, parades will be held in eight other Russian cities — Sevastopol, Kerch, St. Petersburg, Smolensk, Murmansk, Tula, Novorossiysk and Volgograd.

Victory Day is celebrated each year in Russia on May 9 to mark the victory in 1945 over Nazi Germany in the Great Patriotic War, the Russian term for World War II.

Cheaper Covid tests for the vaccinated returning to England

US pauses aid to Sudan, threatens military coup leaders with ‘all measures’ if…

Erdogan backtracks on threats to expel US envoy and 9 other ambassadors, after they…

Watch: Rapper Baba Sehgal finds panipuri in Ukraine, and ends up writing a song about the dish