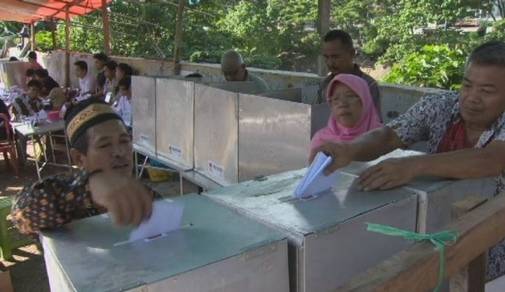 Jakarta, April 9: Indonesians flocked to polling stations on Wednesday to cast their votes in parliamentary elections held simultaneously across the nation.

This year, 15 political parties, of which 12 are national and three are local, are participating in the elections. Some 185.8 million voters spread across the world’s largest archipelago country are registered to vote in the one-day poll.

Official results are due May 7 and 9, Antara news agency said.

Under Indonesia’s complex presidential nominating system, a party must win 20 percent of the seats in the national House of Representatives, or 25 percent of the popular vote, to nominate a presidential candidate. Otherwise, a coalition must be formed with one or more parties to enter the contest.

President Susilo Bambang Yudhoyono cannot seek a third term, so Indonesians will be choosing a new leader for the first time in 10 years.

A major issue in this year’s legislative election is the country’s economy. Analysts said political stability was the key to gaining a double-digit growth.

Indonesia, a country of 240 million, is the world’s third-largest democracy after India and the United States and the most populous Muslim nation.

Iran should not bow to pressure in N-talks: Khamenei