Want to work with Shahid in future: Alia Bhatt 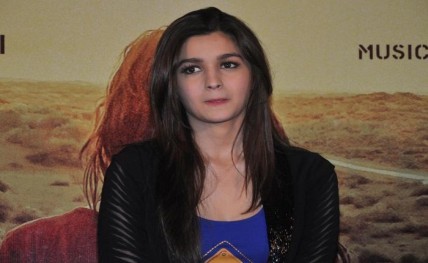 Mumbai, April 8: Actress Alia Bhatt chose to remain silent when asked to confirm whether she is working with Shahid Kapoor in Vikas Bahl’s next project "Shaandaar" and says that she would love to work with the actor in future.

When asked if she was paired opposite Shahid in "Shaandaar", she said: "…Shahid is a fantastic actor and a dancer. He is one of the best dancers we have..I would love to work with him in future."

The film is slated to go on the floors in August.

The actress, who is daughter of filmmaker Mahesh Bhatt, made her Bollywood debut as a fashion-conscious and arrogant young girl in "Student Of The Year" and went to play a deglamourised character in "Highway".

Alia says at the end of the day, talent matters.

"I am a directors child and for me he is my father. I was kept away from the industry during my growing up days. First time I was on set when I shot for ‘Student Of The year’. Eventually what you become is because of your talent. You have to have a talent. Audience want to see good work." (Bollywood Country Report)

PM Modi to interact with CMs on Thursday over COVID…