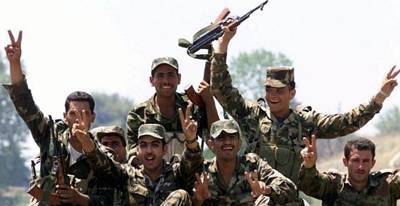 Damascus, April 4: The Syrian government troops killed 20 rebels Thursday in a wide-scale offensive against rebel-held areas in the eastern countryside of the capital Damascus, the media reported.

The troops killed 20 rebels and injured tens of others near the Big Mosque of Damascus’ eastern suburb of Jobar, a hotbed of insurgency against the regime of Syrian President Bashar Assad, Xinhua reported citing official SANA news agency.

The battles in the rebel-held Jobar started three days ago, according to reports. The Syrian troops unleashed an offensive to dislodge the rebels from Jobar and other rebel-held suburbs in the eastern edge of Damascus.

The Britain-based Syrian Observatory for Human Rights said the government troops bombarded Jobar Thursday, adding that 10 rebels from radical militant groups were killed in the suburb of Mlaiha, another rebel-held suburb.

The Syrian troops decided to rid the eastern rim of Damascus from the armed rebels, following the army’s successive victories in the northern countryside of Damascus and the country’s central and northern regions.

More than 150,000 people were killed and millions displaced in Syria since opposition started protests in 2011, which later turned into war between the Syrian army and armed rebels.