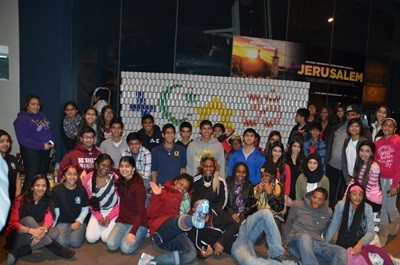 On February 28 at the St. Louis Science Center, 35 teens representing four different faiths (Hindu, Christian, Muslim, and Jew) came together to create an interfaith image from nearly 2,000 canned food items which ultimately will be donated to local food pantries through Operation Food Search.

Inspired by the OMNIMAX film ‘Jerusalem’, the teens created this mural to convey their vision for interfaith dialogue and understanding. Through the collaborative efforts of Center for Indian Cultural Education, also known as Bal Vihar, of St. Louis, and Interfaith Quest, the faith groups raised funds to buy the cans and designed an image depicting their faith symbols and a silhouette of an interfaith skyline.

At the end of the month, the cans will be disassembled and donated to Operation Food Search. The Science Center will leave the structure on display until the month-end on the second floor in front of the Imax theatre.

The ‘Jerusalem’ movie was the perfect backdrop for this project because at one point in the film– a young lady states “perhaps one day we will have the courage to reach across the lines of our faith and discover the other”.

That day is now in St. Louis. This is something that Bal Vihar of St. Louis strongly encourages with the kids. Through Bal Vihar, these kids have had the courage to “reach across the lines” of faith by visiting many different houses of worship and having dialogues with their youth.

Under the leadership of Beth Damsgaard-Rodriguez and Interfaith Quest, they have had many more opportunities for discussions and service projects with local interfaith teens. The kids always come back more enriched from the experience.

Sevilla’s Nasri to miss two matches due to injury

Aishwarya, Vidya most searched on Google

Daily stress may put you at heart disease, stroke risk:…