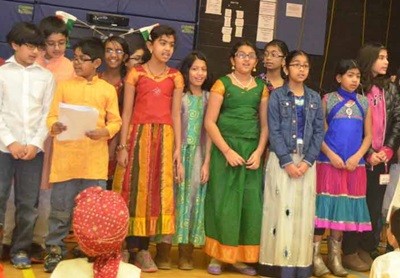 Bal Vihar of St. Louis, Missouri, which has always been a champion of showcasing the Indian culture, its diversity and strength, once again lived up to its reputation when it celebrated the 65th Republic Day of India.

Preparations began weeks before and each class was assigned a specific state from India to research and put a display. There was a panel of judges to review the booths and identify best display in multiple categories.

The Republic day celebrations started with the Bal Vihar School Orchestra comprising a group of young musicians playing the national anthems of the US and India. The melodious presentation was a real treat to watch.

The kids were dressed in traditional Indian clothes and the place was filled with vibrant colors displaying posters, local food items and artefacts, highlighting the richness of the Indian state they were assigned.

The Center of Indian Cultural Education School, as Bal Vihar is also known, had invited St. Louis community leaders to judge the display of booths and information covered.

Thanks to countless and selfless efforts of its teachers, administrative staff and volunteers, Bal Vihar school has been able to give the young children an in-depth view of India’s values, culture, history and food.

Center for Indian Cultural Education – Bal Vihar of St. Louis, a non-profit organization, since its inception in 1992 has been serving the Metro St. Louis Indian community. The primary focus of this organization is to provide Indian cultural education to students aged 5-18, its application and integration with the global multicultural and multifaceted society.

They are also taught discipline, tolerance and devotion in their daily routine. The ultimate goal, as one teacher said, is to throw the light of cultural knowledge on every child, to make every child an outstanding citizen and to spread the song of peace and harmony around the world.