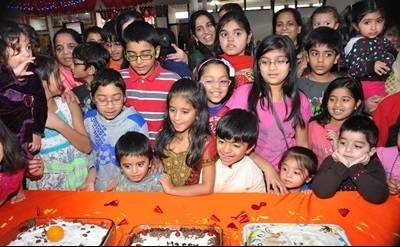 Some 700 devotees took part in the four-hour program which featured Kalash Puja, Dhaja Puja, Maha Puja, Aarti and Mahaprasad and Sangeet Sandhya with scores of kids dressed in their Sunday best cutting a cake and singing a birthday song for the benevolent saint from Virpur in Gujarat, India.

A noteworthy aspect of the celebrations was that most of the selfless volunteers comprised new generation boys and girls, most of them born and brought up in America.

Mayuri Patel’s melodious devotional songs in praise of the Bapa cast a spell on the devotees.

Jalaram Mandir, which has been organizing several such events with active participation of its 250-odd volunteers, is the only temple that celebrates volunteer appreciation dinner with music as well fun and frolic.

Jalaram Bapa was born in 1799 in Virpur village in Saurashtra region of Gujarat whose 210th birth anniversary was celebrated by Jalaram Mandir on October 25, 2009 at 425, Illinois Blvd, Hoffman Estates, Illinois- 60169 in a magnificent way in presence of more than 1,000 devotees.

Virpur, 50 km from Rajkot, is a popular pilgrimage centre where free food is served to the devotees irrespective of their caste and creed.

Ganguly names 5 players he would pick from current Indian…

Those memory lapses could be Alzheimer’s