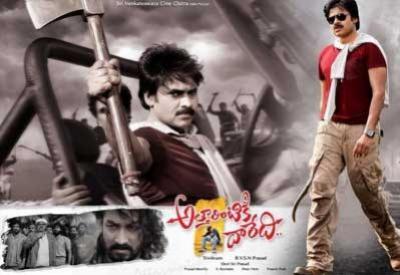 When an intelligent filmmaker (Trivikram) and a superstar (Pawan Kalyan) join hands, one definitely needs to compromise. We can’t expect a superstar to compromise, can we? Therefore, Trivikram ends up compromising on his potential and in turn gives us an aspirational film such as "Attarintiki Daaredhi" (AD), which is shallow from the inside, but stylish on the outside. By doing so, Trivikram might add another commercial hit to his credit, but sells himself short.

An ailing grandfather (Boman Irani), two decades after disowning his daughter (Nadhiya) for marrying against his wish, feels guilty for his mistake. He requests his grandson (Pawn Kalyan) to bring her back to make amends.

Gautham Nanda (Pawan Kalyan) travels to Hyderabad, earns a place in his aunt’s (Sunanda) house as a driver. There, he uses every opportunity to get closer to his aunt and earn her trust, but it doesn’t take her much time to figure out his true identity. Will Gautham succeeds in his endeavour to take his aunt back to his grandfather? This is what we get to see in the rest of the film besides some romance, lots of action and occasional laughs.

For the millionth time, we are made to sit through a hackneyed story, yet we cheer for it for the simple reason that it features Pawan Kalyan. The problem with the film is that it strictly caters to the fanboys of Pawan; entertain them as much as possible even by defying logic and creativity.

When you throw in extra bucks, shoot in exotic locales, make your hero wear stylish clothes and sport an expensive ride, any film will look stylish regardless of whether it features Pawan Kalyan or not. AD is synonymous to that. It’s merely ambitious, but its wafer thin story makes its interior appear superficial.

It’s easy to say to watch the film with least expectations (one of the most common answers to a superstar film), but with Trivikram (known for writing brilliant films such as "Athadu" and "Manmadhudu") at the helm, there’s definitely some level of expectation and when it’s not met then you’re bound to be disappointed. Unfortunately, Trivikram succumbs to star pressure and churns out a highly disappointing product.

Pawan Kalyan is at his best, suave and comfortable in his role that reeks of panache, but he constantly tries to please his mass following with superstar acts. We get see more of his comic as well as emotional side as he attempts to tug at our hearts with some melodrama towards the end. Nadhiya turns in a decent performance, but her role isn’t much different from her last release "Mirchi". Boman Irani is miscast in a role that could have been ideally played by any Telugu artist. His role limited to a wheel chair and tragedy.

The screenplay is wobbly and Trivikram has no clue why he has cast two heroines. Pranitha is merely used to divert Pawan Kalyan’s attention towards Samantha, who is impressive in her role. Brahmanandam, who is mostly used as a trump card in big-budget flicks, is brought in too late and by then I had lost interest in the film. Scenes featuring him are a laugh riot, but it’s seriously late by then. Rao Ramesh gives a very refined performance and it’s good to see him evolving with every film.

The music and cinematography is passable, but the film’s biggest letdown was its running time. At nearly three hours, AD makes you cringe in your seats, especially with the emotional punch it delivers in the climax.

Covid-19: As politicians bicker, families recall the pain of…

I don’t watch my own shows: Terence Lewis