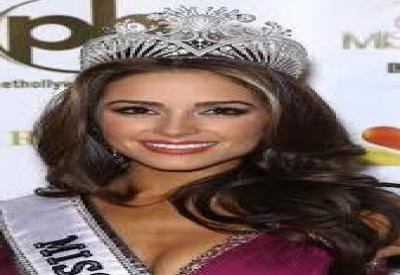 Gurgaon, Sep 27 (IANS) Miss Universe 2012 Olivia Culpo Friday began her official tour of India. She is here on her maiden tour, and she will raise concern about the girl child.

Designer Sanjana Jon will accompany her for the tour.

"It is such an important social cause. We will be celebrating the girl child and are against violence against women. We needed someone like her who is so young and has the heart to associate herself with such a cause," Jon told IANS.

Culpo, 21, will also be going to Mumbai, where superstar Salman Khan will be associating himself with the cause.

"She will go to Mumbai as well. Salman Khan will join us in a press conference there. Other people from the fraternity like Lata Mangeshkar (singer) and Sajid-Wajid (composer duo) will also be joining the cause," she added.

The Miss Universe is visiting India for the first time and she will be seen in Indo-western attires.

"She will be wearing Indo-western skirts and lehengas. She will also be in a sari for a photoshoot as it is tough for someone to wear a sari if they are not used to it. I also want her to wear a traditional Punjabi suit," said Jon.

Jon also said that Culpo has shown her love for Hindi films and might even be interested to be a part of the movie industry.

"She is perfect for Bollywood. She loves our movies. I think she will be interested to be a part of the industry as well. I hope she and Salman bhai work together," Jon said.