Cultural heritage is the focus of St Louis school 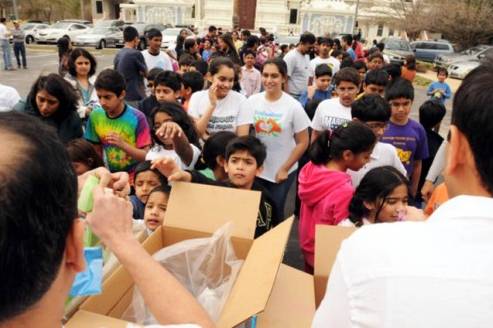 Hundreds of children and adults joyously threw hundreds of pounds of colored powders at each other Saturday afternoon behind the Mahatma Gandhi Center, off Weidman Road in the Manchester area.

Behind the appearance of colored chaos, they were celebrating one of Hinduism’s brightest holidays, the Holi Festival of Colors.

Before the festivities kicked off, 13-year-old Neha Joglekar, of Chesterfield, reminded other children about the meaning of the ancient Hindu festival, talking about its emphasis on forgetting class and other differences, loving God and engaging in just plain fun.

She admitted she wouldn’t know anything about this or other Indian customs without the Center for Indian Cultural Education/BalVihar of St. Louis School, which is celebrating its 20th anniversary this year.

“Over the last year, I’ve been learning a variety of cultural and religious stuff, and I think it’s very interesting and enriching, with nice teachers,” said Neha, who was born in India but came to this country when she was 4.

“I’m learning a lot about my roots, my traditions, and I love going on Sundays, meeting all the bright faces. I’m so glad to have this wonderful opportunity.”

That comment is magic to the ears of Sudhir Brahmbhatt, of Wildwood.

Brahmbhatt, 62, is president and founder of the non-profit BalVihar, which for the last three years has been based in leased space at Ladue Middle School. More than 40 volunteer teachers hold classes from 10 a.m. to 12:30 p.m. every other Sunday. Small fees cover basic costs.

The school serves more than 260 children, ages 5 to 16, focusing on instilling and preserving Indian cultural values among children of Indian origin. Kids learn about Indian festivals, Indian music, concepts such as karma, Hindu scripture, yoga and meditation, and goal setting.

The school fosters a sense of community in its students by sponsoring visits to hospitals, senior centers and food drives, and by encouraging students to take part in interfaith events.

The school will celebrate its 20th anniversary at 5 p.m. April 27 at Clayton High School with cultural programs put on by children, as well as a dinner.

BalVihar has come a long way since Brahmbhatt was asked to help found the school after he had started a similar school in Allentown, Pa., where he lived before relocating to St. Louis.

The St. Louis BalVihar — which means children’s school — has more of a cultural focus than a religious focus because it’s not connected with a Hindu temple, as are similar schools elsewhere in the country, Brahmbhatt said

“We teach the children that the Indian culture is one of the oldest civilizations on Earth, with many things, like the concept of zero, invented there,” he said.

The first year, almost 100 children met in the Gandhi Center, but it soon outgrew that space. After holding classes at several public schools, it settled at Ladue Middle School.

“Parents quickly realized we were being very disciplined, with a set curriculum and dedicated personnel, and more children kept coming,” said Brahmbhatt, who works as a technology manager in biotech and pharma with Air Liquide Industrial U.S.

“Today, we see kids who have gone through BalVihar who have perfect ACT and SAT scores, kids being admitted to Harvard and Yale,” he said. “Our goal is to give proper guidance to children to be successful.”

BalVihar here even has supported start-up schools in South Carolina and Ohio.
While the school’s growth has been restricted because of a shortage of space and the lack of a permanent home, that could change within a few years,Brahmbhatt said.
A new building is in the planning stages on the Mahatma Gandhi Center site at 725 Weidman Road. The school could open as soon as 2015. Plans will include second-floor classroom space for BalVihar, allowing it to expand class offerings and increase enrollment. And it will be able to offer more activities for adults, such as yoga classes, he said.

“We hope to be able to grow to 600 students with this new space,” Brahmbhatt said.

Subbu Subramanian, of Creve Coeur, one of three executive directors of the school, said BalVihar complements what the kids get in their daily school experience.

“We want them to contribute to society, be grounded and respectful, but not forget their roots,” he said.

“Brahmbhatt is pleased to see the children of those first students now starting to go to BalVihar. About 1,000 all told have graduated from the school through the years.Sisters Tanvi and Tejasvi Subramanian, of Creve Coeur, are alums.Tanvi, 19, is a BalVihar youth teacher and says it’s easier for her to teach because she and the younger kids all grew up in America and have that shared experience.”I can say I’m Hindu and proud of my heritage,” said Tejasvi, 17.

JD-U may give BJP time to declare PM candidate