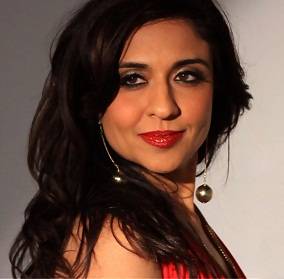 New York: Sarika Batra is thrilled that her inspirational talk show ‘Andaaz’ on Sony network is now in its fourth season. “Andaaz is a feel good show that empowers you,” she told The South Asian Times. “It is different from the usual South Asian fare in America which is either escapist Bollywood mix or news.”

Airing three times a week, the show has become so popular now that it reaches out to over 20 million people worldwide and will soon be seen on a major TV channel in India.

The celebrities Sarika has interviewed for her show include Deepak Chopra, Sri Sri Ravi Shankar, Priyanka Chopra, Vinod Khosla, Naeem Khan and Zakir Hussain. “We tell their stories of how they overcame obstacles to achieve success,” she elaborates.

Based in the Bay Area, Sarika’s own story is inspiring. She studied film at Northwestern University and wanted to create inspirational content for the South Asian community. Not disheartened by having no contacts in the media, she tried to meet the decision maker at Sony for six months and kept getting ignored. Finally, running into him at an event, she pitched her idea and he liked it, and Andaaz was launched. Of course, to take it off the ground and make it successful has tested her own entrepreneurship skills. The message she wants to give to young people is to not give up on their dreams, to give their best shot with self-belief and be assured of success.

Talking about the highlights of her show this season, Sarika says, “This season we are getting people to expand their minds. Our community tends to focus on what they know. We’re sort of stretching people’s mind. We’re doing a lot on artificial intelligence, faith, innovation, and talking to astronauts. It’s to show people what you can do in this world and how it’s going to impact us in the future.”

Sarika Batra has also been featured in the book ‘Roshni: The light of South Asia”’ about notable Indian Americans.