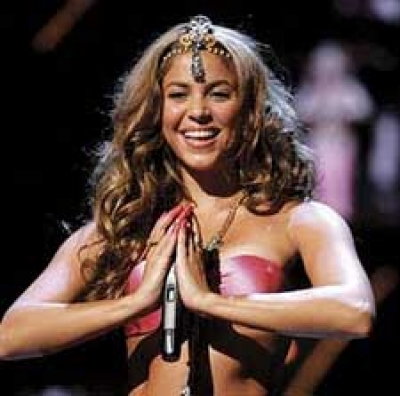 Though some other invitees like the Beckhams, Ricky Martin, Bono, Shahrukh Khan, Priyanka Gandhi were a no-show, the party was one of the biggest assembly of big names, mainly corporate honchos from Delhi and Mumbai.

“What is heartening to see that Udaipur has figured now as a destination for big bashes apart from a wedding and honeymoon destination,” said Komal Kothari, a travel agent, welcoming the trend.

Jagmandir, the island on lake Pichhola hosted over 400 guests who included Sant Chhatwal, tennis legend Martina Navratilova and her friend Julia Lemigova. The guests came in commercial and 30 chartered flights.

The party’s anchor was Kabir Bedi who introduced KP Singh.
Adnan Sami crooned “Kabhi To Nazar Milao” and other numbers. He was followed by Shakira who dazzled in her gold top and gave a sizzling performance singing her popular numbers. ‘Hips Don’t Lie’ star Shakira was the talk of the town and many youngsters were loitering around Jagmandir trying to gate
crash. But Jagmandir was like an Alcatraz where one could reach on a boat only.

The organizers had also planned a fireworks show worth Rs 2 crore, disallowed by the district administration for fear of noise pollution.

The Colombian singer Shakira met 13 girls drawn from various schools of Udaipur on Tuesday at the State Institute of Education & Training and was surprised to know that five school going tribal girls were already married.

Amid calls for boycott, ‘The Family Man’ creators say they…