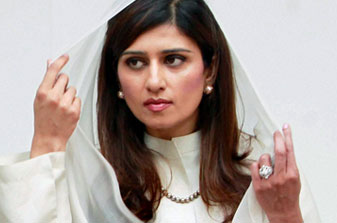 Pakistan’s foreign minister Hina Rabbani Khar on Sunday struck a positive note on the future of Indo-Pak relations, saying the “trust deficit is zero or it has shrunk to a large extent” after the meeting between two Prime Ministers in Maldives. When Prime Minister Yousuf Raza Gilani and his Indian counterpart Manmohan Singh met in the Bhutanese capital of Thimpu in April 2010, they set the goals of reducing the trust deficit and improving the environment to make dialogue possible, Khar told a news conference at the Foreign Office.

Since the meeting of the premiers on the margins of the 17th Saarc Summit in the Maldives last week, the “trust deficit is zero or it has shrunk to a large extent” and the two countries now “need to start building on trust”, she said.

A conducive environment will help both sides carry on with their dialogue to address festering disputes, she added.

“In Thimpu, the two Prime Ministers gave us a direction and we have done a reasonably good job. From the Thimpu spirit, it’s now Addu hope,” she said, referring to the resort in the Maldives where the Saarc meet was held.

“We have invested far too much in seeking out hostility towards each other and too little in seeking out peace with each other. I told my Indian counterpart that I’m competing with you in positivity,” Khar said.

Asked about the Indian Prime Minister’s remarks that he would visit Pakistan only if there is some movement in prosecuting Pakistani suspects charged with involvement in the Mumbai attacks, Khar sought to link the 26/11 attacks to Islamabad’s demand for action against those responsible for the bombing of the Samjhauta Express train in 2007.

An Argentine who dedicated five decades to Indian dance