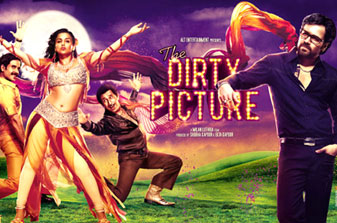 Directed by Milan Luthria, The Dirty Picture is said to be the tragic tale of a southern sex symbol’s rise and fall and Vidya is playing the voluptuous woman who was loved and desired in the 1980s and 1990s.

Leaving behind the grace and charm she showed in her first film Parineeta and then again in films like Paa and No One Killed Jessica, Vidya has done everything – from wearing garish clothes to showing meat to making provocative dance moves – to make her character believable.

In fact, she has surpassed her own portrayal of a sexually charged woman in Ishiqya.

When launched, the film grabbed attention as it was touted as a biopic on southern sex symbol Silk Smitha who had committed suicide in 1996. But recently when the late actor’s brother objected and filed a complaint against the content of the film, the makers said it’s not based on anyone’s life.

Vidya pulled out all stops at the music launch of the movie when she gave an adrenaline pumping performance along with co-star Naseeruddin Shah.

Why Don’t Children Tend To Get as Sick From COVID-19?