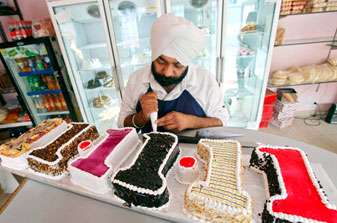 Shanghai, : Thousands of couples across Asia swamped marriage registries and held mass weddings on Friday, believing that the quirk of the calendar makes 11/11/11 the most auspicious date in a century.

In China registries were packed with couples wanting to wed on the date that has been recognised as an unofficial “singles’ day” since the 1990s because it is made up entirely of the number one.

“We are getting married on the day of ‘six ones’. We will no longer be single on the once-in-a-century singles’ day,” said Shanghai hotel manager Li Xue, 26, who brought forward her wedding plans after realising the date’s significance.

Traditionally seen in China as a good day to marry this year’s November 11 is viewed as particularly special because the year also ends in the number 11. In the commercial capital Shanghai alone, nearly 5,000 couples got married.

In Vietnam, 80 couples planned to get hitched at a mass wedding to be held in Ho Chi Minh city.

One of Hong Kong’s leading feng shui masters, Mak Ling Ling, said November 11 was a good day for marriages, but that it was also auspicious for other new beginnings, such as moving house and groundbreaking ceremonies.

“It’s a good day from a Chinese geomancy perspective, not just because of the numbers 11/11/11 which signify eternal love,” said Mak, an author and television personality.

Some people also believe the date is lucky because if you add the numbers in the date-six times one plus 2-the total is eight, traditionally a lucky number because it sounds like part of the Chinese phrase for “get rich”.

In South Korea, hospital officials moved to debunk reports that the number of women seeking Caesarian operations on the day had jumped as mothers sought to give their children that special birth date.

However, Hong Kong feng shui master Mak warned that marrying on the lucky date would not necessarily guarantee happiness. “It’s a good start, definitely, but whether or not they will end up in divorce, it depends on how the couples maintain their marriage,” she said.